Many years ago Paul Graham wrote an essay, “How to Disagree”, that proposed a hierarchy of disagreement with seven levels, from DH0, “name-calling”, to DH6, “refuting the central point”. Someone then created a pyramid diagram based on this.

Recently when someone commented unhelpfully on Twitter, I replied with the diagram, and said:

Your level is: ‘contradiction’

I invite you to ascend the hierarchy.

People seemed to like it. So let’s make this a thing.

Here’s a revised image to use (also on Wikimedia). This is public-domain. 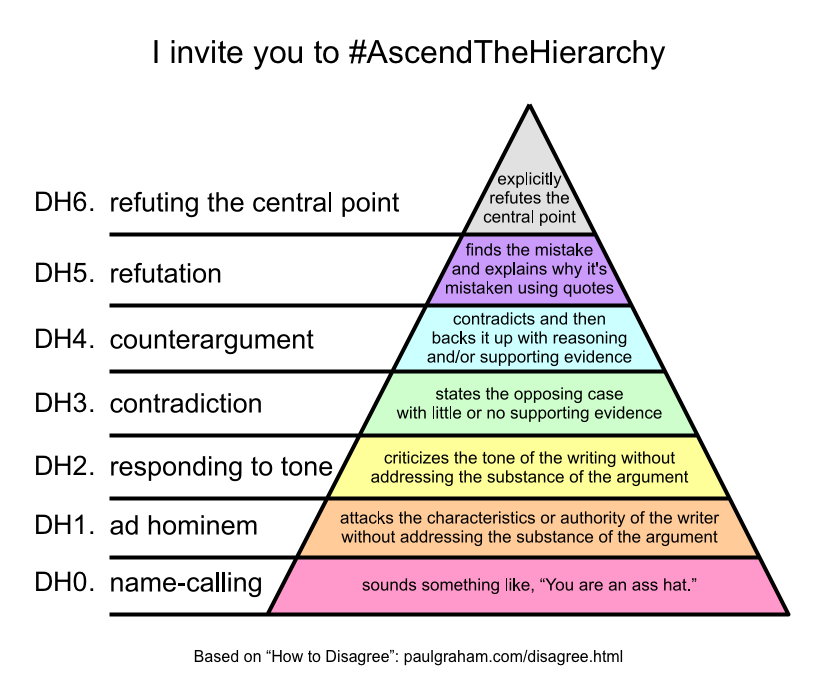 I’ve added numbered labels to the levels for easy reference, the URL for Graham’s essay, and a hashtag.

How to use it

If someone makes a comment that is not worth a direct response:

Who to use it with

People who seem to have good intentions, are arguing in good faith to come at truth, and are willing and able to ascend the hierarchy.

Don’t use it with trolls or those consumed by anger. Ignore, mute or block instead.

When to use it

When you need to respond productively to an unhelpful comment.

This is a substitute for (1) ignoring a comment or (2) responding in anger. It’s a way to get the conversation back on track and make it more productive.

Responding based on level

Putting the above together, this is a rough guide for responding based on the level of someone’s comment:

Adjust your reaction up or down this list based on their intentions, how long the discussion has already gone on, and how much energy you want to give it. (But remember to use your time and energy wisely.)

Other ways to improve discourse

The best way is to model it. Aim for the highest levels yourself. Never go below DH4; strive for DH6.

Make your level explicit: “I understand your central point to be X. Here’s why that’s wrong…”

The goal is to improve online discourse by making people aware of this hierarchy and inviting them to move up it.

I use the word “invite” deliberately to acknowledge that they have a choice, that I cannot control them, and that this is a request, not a demand. (Of course, choices have consequences, and those who refuse to ascend the hierarchy will be ignored, muted or blocked.)

→ What went wrong with the ventilator stockpile?

← The civil liberties threat from COVID-19

Get my posts by email: